Ok, I’ve got my Tastings Journal, I’ve got my Michael Jackson’s Malt Whisky Companion, I’ve got bags of enthusiasm. I want to begin my whisky quest.

But it’s 2pm on a Wednesday afternoon –  too early to start drinking. And I can’t even use the excuse that it’s raining because, for once, it isn’t.

There is no justification for partaking of whisky right now. And, honestly, I’m not really all that comfortable with stumbling around inebriated in the middle of the day anyway – in my own home or elsewhere.

So I opt to do some couch-based research instead. I open my laptop and read an article about a journalist who tried to learn to like whisky. She seems to have gone from whisky doubter to fan in the space of five drams. My experiment could start to get tasty far quicker than expected. I decide to use the Michael Jackson bible to investigate which whisky might be good for a novice to start with.

Trying to be a good student, I begin to read through the bit at the start of the book which describes the whisky making process. If I am honest, I find it a bit dull. I have never been good at retaining detail about processes if they contain either inanimate objects or people from long ago. I decide to skip that bit for now.

The most interesting part of the book is definitely the individual smell and flavour descriptors attributed to each whisky. I am astounded at the specificity and range. And the fact that anyone got to the tasting part of some of these malts.

Intriguing, yet not exactly mouthwatering, are the whiskies described as smelling of “cowshed”, “plastic bandage” and “an old Hornby train set”. Slightly more enticing is the idea of “plantains being cooked on a barbecue,” “a sliver of unripe plum” and “Parma Violets”. Wait! Parma Violets? I used to eat those when I was 8. They tasted like my Gran’s soap, yet I devoured them all the same. And leafing through the pages of this book it seems that quite a few confections of my childhood are represented: “Lemon Bon Bons, “Wine Gums, “Bubble Gum.” Wow! If whisky can taste like sweets then it could be ok. I start looking for Walls Vienetta and Wham Bars. Disappointingly, there is no mention.

Still, I am enthused. I definitely did not identify any of these exciting smells in any of the wound-wash scented whisky I was exposed to in the past.

I think that maybe, today, to get started, I could do some sniffing instead of drinking. In fact, I have a pack of miniatures in the kitchen that are begging to be tampered with. Yes, yes, sniffing it is. 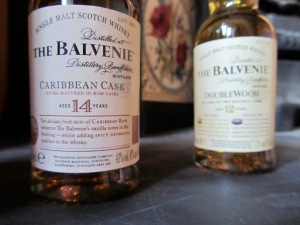 I crack open the most exciting sounding bottle. It’s called Caribbean Cask. Now, I know from my “research” that this means the whisky has been stored in casks which previously held rum, so it should smell of rum and rum-related things: palm-fringed beaches, a sailor’s cabin, organised crime, etc.

I breathe in and take a deep, searching sniff.

I breathe in again. This time I’ll take anything: a coconut shy, banana Chewits, a Prada handbag.

Still nothing. It just smells like whisky to me. Pah!

I twist the cap off one of the other bottles – it’s more wooded, apparently – and again, my nose goes on the prowl. Searching, searching. But, nope, it also smells like whisky. Gosh, I thought I had a really good nose – I often smell things nobody else does. I clearly have a long way to go when it comes to whisky tasting.

In the evening, Mr Malt and I go out for a drink in our local hostelry, which happens to have a beautiful view of the sea. This is probably the closest I can get, at present, to feeling like I am drinking whisky in the great Scottish outdoors.

I have no idea what to order. All I know is that I am not yet ready to drink any of the Islay whiskies. Those are the ones which are peaty, smoky and smell like the inside of a doctor’s bag. I need something a bit tamer and sweeter right now.

Mr Malt, old pro that he is, orders an Ardbeg 10 year old, and I, randomly, select an Oban 14 year old. I don’t know why. I just thought it might be my kind of thing, perhaps because I have been to Oban and had a nice lunch there. I could be going about this all the wrong way.

We sit down and I sniff my drink. The alcohol stings my eyes. This isn’t for the faint hearted, this whisky lark. But, singed retinas aside, it smells nice. Kind of like caramel and…er…caramel. I just can’t pinpoint any other smells. Damn. I wonder if I should have brought my Michael Jackson book to help me. No, no, I want to try and work this out myself. I can see later if my thought matches the master’s.

I take a sip of the whisky and try to notice how it feels in my mouth. Smooth comes to mind. Yes, it definitely feels smooth. I swallow, and the alcohol which startled my eyes, assaults my throat. I wonder if you get used to this.

In terms of taste, as I carry on sipping, I can’t get much besides caramel. I try to be clever and come up with permutations of caramel, but all I can think of is Toffee Crisp wrapper, Butterscotch Angel Delight and those yellow Quality Streets. And, to be honest, I can’t smell those things. I am just pulling confections out of my repertoire to try and be like Michael Jackson. 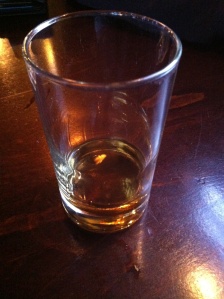 I conclude, instead, that the whisky is “not bad”. I wouldn’t go so far as to say I like it. I do like experimenting with drinking it, trying to identify tastes, and how it makes me feel Scottish in a whole new way, but, enjoyment? Not quite yet.

I am conscious that I may be drinking whisky the wrong way. I am used to drinking wine which, when tasting, you swirl around in your mouth and mix with your saliva. Whisky, I think you are meant to just knock back, no messing. But I’m not sure. I note to check the facts on that one.

I sniff at Mr Malt’s whisky and compare it to mine. It smells very medicinal, as expected from an Islay malt. In some ways the smell is sort of comforting. Like the sight of Charlie from Casualty after falling off a step-ladder.

We go back home and consult the Michael Jackson book for notes on what we’ve been drinking. Mr Malt is excited because in the book it says his whisky tastes of carbolic soap, which is used in hospitals, and he said that his whisky tasted of hospital wards. I appear to have got mine all wrong (I know, I know, it’s not a test). Oban 14 year old, apparently, smells of “pebbles on the beach,”  “a whiff of the sea” and “a touch of fresh peat”. Not to me it doesn’t. The body is “viscous” so I maybe get a point for saying it was smooth. I seem to have been a bit off with the flavour, though. The book describes the palate as “perfumey” with a “faint hint of fruity seaweed” then “lightly waxy” and “becoming smoky”. My palate needs fine tuning. I am crap at this. I clearly need to smell more pebbles and eat more fruity seaweed.